HOME
GROWTH TIPS
HEIGHT & SCIENCE
FAQs
CONTACT US
ABOUT US

Does drinking milk make you taller?

Nobody is exactly sure as to where the claim comes from. It might be a sort of intuitive understanding, deriving from the belief that newborns of any mammal species drink milk during a period of rapid growth. It was in the 1920s that milk was increasingly promoted as an essential for childhood nutrition by a few disparate threads. Following this event, the next few decades brought about extensive research into the correlation between milk and height as well as the discovery of most of the minerals and vitamins we know today. Various healthcare institutions have got heavily involved in childhood nutrition since the beginning, with vigorous efforts in pushing the idea that milk is strongly linked to height growth in children. But is it actually true? Can drinking milk make you taller? Let’s find out in the following article.

Does milk make you taller?

Does milk help you grow taller? To answer that question, first, we have to figure out which variables are responsible for your height.

The first variable to come to everyone’s mind is genetics. Indeed, your genes play a big role in your height, and most of the variation in height is determined by whatever genes your parents pass on to you. The other variables are environmental factors such as nutrition, sleep, exercise, and living environment.  Some infectious diseases can impede your growth as the body devotes tremendous energy to staving off the infection instead of increasing height, which potentially leaves a permanent impact on height.

Each person has their own potential height which means the height they will grow up to if nothing goes wrong, for instance, disease or malnutrition. Although your height is already programmed by genetics, the best thing you can do to reach that predetermined height or even surpass it is to take good care of the different variables affecting your height growth.

Milk is found to contain a protein called insulin-like growth factor 1, more commonly known as IGF-1, a protein naturally produced by the human body. IGF-1 has the function of triggering overall growth; in other words, it tells all sorts of cells, be they blood, tissue, or bone, to reproduce through division and duplication. IGF-1 supplements are also used to treat children with height disorders. For this reason, it is a major contributor to a person’s vertical growth.

What is more interesting about this protein is that people who drink milk have higher levels of IGF-1 in their bloodstream. Studies have indicated that something about milk stimulates milk drinkers to produce more IGF-1. However, the belief that drinking milk to take extra IGF-1 and grow taller than your genetically predetermined height is not unanimous with a lack of solid evidence.

So, what really are the benefits of drinking milk then?

This is not to say no to your question of “Can milk make you taller?”; in fact, quite the opposite. Milk is incredibly rich in protein and has a bunch of minerals and vitamins in it. It is a very nutritious food. As part of a diet, milk apparently contributes to a child’s nutrition. Thanks to substantial subsidies from the government, milk is also an exceedingly cheap source of protein, vitamins, minerals, fat, and calories, altogether greatly benefiting childhood and teenage nutrition.

Does drinking milk make you taller?

Notwithstanding this, so far there has been no research stating that milk has any magical powers beyond being an inexpensive nutritious food. This is partly due to the fact that most of the research on this topic is flawed and extremely basic. Moreover, the lack of clear science also results from the serious difficulty in figuring out the effect of milk on children’s development.

It would take a large sample size to be under investigation over a period of decades. The researcher would need to control for roughly a million variables ranging from genetics and activity levels to socioeconomic status and the rest of the studied population’s diet. Besides, since it has become common knowledge that drinking milk will make you grow, there are hardly any well-controlled studies that take into consideration the fact that you are also just getting fats, calories, or protein when you drink milk. More importantly, no one is super keen on funding that kind of study, least of all the dairy industry which understandably would not be interested in supporting a study proving its advertisements are wrong.

What about other kinds of milk? Does almond milk make you taller?

Recent research has revealed that children who drink plant-based milk are shorter by 0.4 cm on average compared with those who drink cow’s milk. Youngsters who drink alternative milk are also shorter than the average height for their age. Although the reason as to why drinking non-cow’s milk reduces children’s height is not examined, researchers speculate that young people who have non-cow’s milk may consume less fat and protein, which is responsible for their stunted growth.

Does almond milk make you taller?

Height is an important indicator of children’s overall growth and development. While cow’s milk has been a reliable source of fat and protein which ensure proper growth in childhood and adolescence, many parents are now switching to non-cow’s milk for their children. As the nutritional contents of most non-cow’s milk are not regulated by the government, it may have lower nutritional contents in comparison with cow’s milk. In addition, little research is available on the impact of non-cow’s milk on children’s development because the shift toward purchasing alternative milk has been relatively recent. This, therefore, makes it difficult for consumers to consider the pros and cons of selecting non-cow’s milk over cow’s for their children.

In short, as best as contemporary science can answer, milk alone cannot make you grow taller simply because there is no particular food or recipe capable of that. Aside from your genetics, it takes a combination of proper nutrition, regular participation in sports or exercise, sufficient sleep, a clean living environment, and a healthy lifestyle to ensure you can reach your maximal height potential. Still, incorporating milk into your daily diet is useful as it provides your body with an adequate amount of essential nutrients.

NuBest Tall is a growth supplement made by NuBest company. It is formulated with Calcium, Collagen, herbs and nutrients claimed to promote bone growth of growing children and teenagers. Click here for more details. 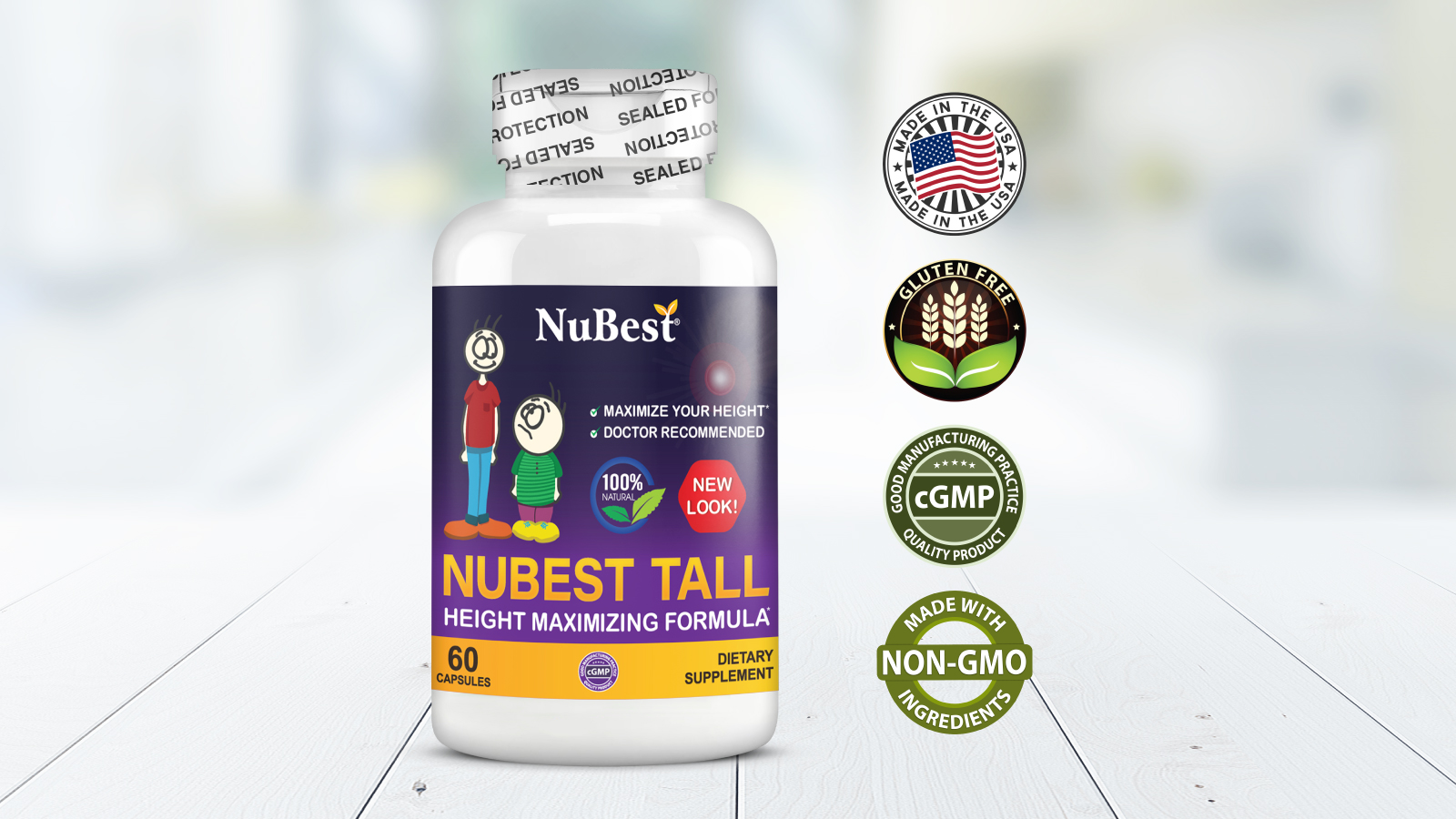 Directions: For children (5+) and teenagers who do not drink milk daily.

+ Under the age of 10: Take one (1) capsule twice daily about 30 minutes before meals or 1 hour after meals.

+ Ages 10 to teenagers: Take one (1) capsule three times daily about 30 minutes before meals or 1 hour after meals.

Does Pull-Ups Increase Height?
by Joy Bauer   |   Sep 09, 2021
Once you are here, I am sure you can find a solution to deal with your short stature. And today I have something new for you but make sure ...

Does losing weight make you taller?
by Joy Bauer   |   Sep 04, 2021
It is common knowledge that height and weight go hand in hand, and many believe by shedding some pounds, they can add inches to their ...

The Average Heights of Men Around the World
by Joy Bauer   |   Aug 10, 2021
Human height is largely a heritable trait. However, during pregnancy, childhood, and adolescence, certain environmental and non-genetic ...